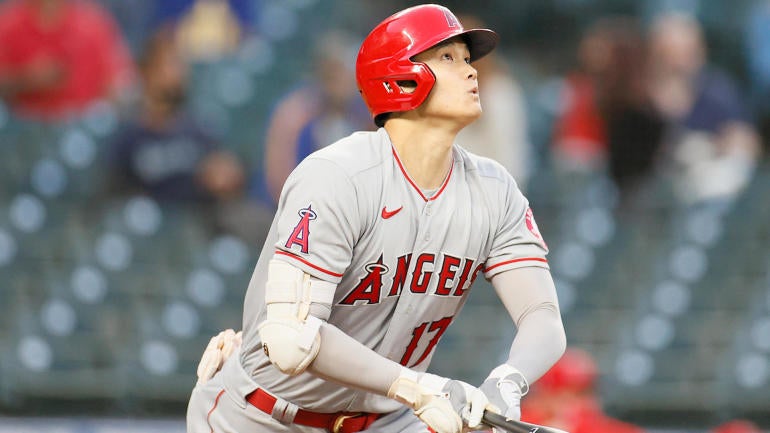 It seems like every night we talk about Shohei Ohtani on the podcast, but how can’t we? He just hit his league-leading 13th home run and, oh, he throws 100 mph, too. I feel like the term “unicorn” is thrown around too often in sports but if there ever was one, it’s Ohtani. You can read more about him below.

We also focused on hitters who have improved in May, as an extension of Chris’ article he wrote on Monday. A few names I noticed making adjustments include Randy Arozarena, Joey Gallo, Cavan Biggio, Max Muncy and Eugenio Suarez. I would be interested in buying each of them to an extent, but let’s focus on Suarez. He has nine hits over his last eight games including three home runs, plus the strikeouts are way down this month. He’s striking out just 25% of the time in May compared to 38% in April. We know what Suarez is capable of in the warm weather and a hitter’s haven like Great American Ball Park. If you’re in need of pop from the shortstop or third base position, Suarez is your guy.

Of course, you can subscribe to make sure you get the latest episodes of Fantasy Baseball Today right when they drop on Apple and Spotify.

Angels DH/SP Shohei Ohtani has been nothing short of dominant as both a hitter and pitcher this season and that trend continued on Monday. Ohtani hit his league-leading 13th home run and it was a mammoth three-run shot in a game the Angles ultimately won by three runs. This came just one day after Ohtani’s go-ahead two-run homer gave the Angels the lead in a game they would ultimately win 6-5 on Sunday to avoid being swept by the Red Sox. Ohtani is not only making a case for Fantasy MVP but also for reality MVP.

On Monday, Ohtani took an eye-level pitch on the outer half of the plate and pulled it 420-plus feet for the home run. We’re seeing the best-case scenario right now for Ohtani, and yet despite that, Scott doesn’t think you should consider selling on him. In fact, if we could redraft the entire season, Scott has him as a locked in second-round draft pick and someone who belongs squarely in the discussion as Fantasy’s MVP.

Ohtani has a .931 OPS with six stolen bases and he’s contributing across the board in all categories except for batting average — and even there the batted ball data suggests he has gotten a bit unlucky. Chris is ready to make the case for Ohtani as the Fantasy MVP (with John Means as a potential runner-up based on draft value).

Is it finally time to move Garcia up the rankings?

Rangers OF Adolis Garcia is quickly becoming one of the best waiver wire adds in Fantasy. On Monday, he went 2 for 4 with a home run and a stolen base. His stolen base was of home — a bit fluky — but that gives him four on the season. More importantly, he’s now up to 11 home runs on just 135 at-bats. Garcia is now batting .296 with a .933 OPS. He’s the OF16 in Fantasy points per game and OF9 in Roto.

So, buy or sell Garcia as a top-30 OF rest of season? This one gets a “sell” from Scott, who thinks his plate discipline will catch up to him and that there’s a reason he’s been buried in the minors for so long. Although he sees a solid power/speed combination here, Scott doesn’t have him in his top 40 outfielders over the rest of the season. I’m taking the opposite approach and getting him inside my top 40 OF rankings because it does seem like he has made some strides toward improving his approach.