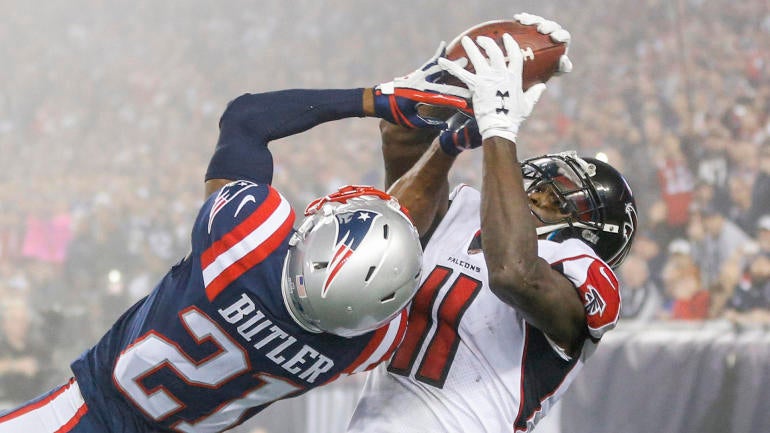 Is one of the most exciting offenses in the NFL about to get broken up before they even play a down? There has been speculation around Julio Jones‘ time in Atlanta coming to an end basically since the Falcons played their final snap in 2020, and there have been more whispers than ever of late.

How much of that is just posturing and how much of it is real remains to be seen, but we got our most concrete information Monday when Jones spoke to Shannon Sharpe on Fox Sports’ ‘Undisputed’ about the situation. When asked by Sharpe if he wanted to remain in Atlanta, Jones didn’t mince his words:

I’ll admit, it would be disappointing not to get a chance to see an offense centered around Jones, Calvin Ridley and Kyle Pitts play at least one season together because that could be truly special. Jones and Pitts are 99.99th percentile talents at their positions, and Ridley is well established as a perennial Pro Bowl kind of talent. We haven’t seen many trios like this before, so let’s hope this one gets a chance.

Now, however, it looks nearly certain that won’t be happening. The Falcons are reportedly looking for a first-round pick in exchange for Jones, and according to CBS Sports NFL Insider Jonathan Jones, don’t expect them to move him for anything less than a second-round pick. Jones has had his troubles staying healthy and is owed a ton of money, but he’s still a hugely impactful player when he’s on the field.

Of course, if Jones isn’t going to play for the Falcons, where he is going to play becomes an incredibly important question for the 2021 Fantasy season, because while his 2020 was ultimately a disappointment because of injuries, Jones was still an elite player when he was on the field. In today’s newsletter, I have the latest speculation on Jones plus three landing spots I’d like to see him in if he does get traded.

Later this week on both the Fantasy Football Today podcast and right here in this newsletter, we’ll be taking a look at early ADP data from Fantasy drafts going on right now to see where the best and worst values might lie, plus we’ll have an advanced stats primer to help you take your research to the next level this season and a mailbag with answers to some of your toughest questions — so email me at Chris.Towers@CBSInteractive.com to get your questions featured!

As for today’s newsletter, here’s what you can expect:

Plus, we’ve been doing a ton of mock drafts and rankings updates lately over at CBSSports.com/Fantasy/Football, so here’s what you might have missed from last week:

Julio rumor mill is heating up

The Falcons are in a tough situation with their salary cap, and Jones’ name has been mentioned quite frequently — with NBC Sports Boston’s Michael Holley reporting Jones wants to play with Cam Newton. The NFL Network also reported that the Patriots have begun to have internal discussions about the possibility of trading for Jones, who carries a significant salary and cap hit for this season and next — and the Falcons need to find money to sign their draft picks.

The Patriots wouldn’t be at the top of the list of teams we’d want to see Jones land on if it came to it, though it wouldn’t be the worst outcome. The Patriots badly need talent in the passing game, even after adding Hunter Henry, Jonnu Smith, Nelson Agholor and Kendrick Bourne in free agency. Jones could continue to see a target share north of 25%, and his presence would surely make the Patriots offense as a whole better — as long as he’s healthy. Jones would lose value with a move to New England, for sure, but he would still be a solid WR2 in my eyes, and he could help make Cam Newton a top-12 QB again.

Remember, Newton was excellent rushing the ball last season. The Patriots just couldn’t do anything in the passing game, which held him back. Jones could make a huge impact there and would likely make the Patriots quite a bit more pass heavy overall. I would rather see Newton starting than rookie Mac Jones in that circumstance, too.

Here are three other teams who could realistically fit Julio Jones that would be ideal for Fantasy:

After we discuss the latest news from around the NFL, we break down some early average draft position trends that caught our eye on the Fantasy Football Today in 5 podcast. Listen below and follow at Apple, Spotify or wherever you get your podcasts:

Reason to be concerned about Swift?

Lions offensive coordinator Anthony Lynn recently did a sitdown interview with The Athletic’s Chris Burke and Nick Baumgardner to discuss the addition of Jamaal Williams and how intends on using him alongside D’Andre Swift, and one quote in particular got a lot of attention in Fantasy circles. I’ll just throw the full quote out there first so we’re all on the same page:

“Jamaal is what I’d call a classic “A” back. I like to break the backs down into A and B. My “A” backs are normally my bigger backs. They can run between the tackles, block probably a little better than a “B” back, they can also run the perimeter. I can leave those guys in there for all three downs. My “B” back comes in, he’s a guy that sometimes I want to use in space more. He’s my speed-in-space guy. I feel like Jamaal would be an outstanding “A” back. I like his energy, I like his pad level and the way he runs the football between the tackles.”

It kind of sounds like he views Williams as a lead back, doesn’t it? But, of course, he’s not necessarily drawing a direct comparison with Swift there, is he? He’s just saying Williams profiles well as what he wants from a lead back. Except, later in the interview, he had this to say:

“I don’t see them as being interchangeable, I see them more as being complementary. Swift is more of a speed-space back; Jamaal can be more of a between-the-tackles and sometimes perimeter.”

It sure sounds like Swift is the “B” back and Williams is the “A” back, but that doesn’t mean Swift is going to be the complement to Williams, right? Am I in the bargaining stage right now?

It’s interesting that Lynn thinks so highly of Williams, and bodes well for his chances of continuing to be a viable Fantasy option in his own right. He’s been a fringe starting option over the previous two seasons while playing alongside Aaron Jones in Green Bay, but Jones was, of course, the Fantasy star of the two. Williams played more than we might have wanted to see for Jones’ sake, but he never really challenged Jones as the lead back. I would expect we see something similar from the Lions, with Swift in the Jones role.

But it’s interesting to consider the direct analogy to Lynn’s coaching career: Swift as Austin Ekeler. That role worked out just fine for Ekeler, who feasted off a huge passing game role to emerge as an elite Fantasy RB the past two seasons in his own right. Swift showed off plenty of passing game chops as a rookie, and it’s exciting to consider the possibility of him seeing an Ekeler-esque role in the passing game — is 90 targets a realistic expectation? More?

However, while that would be excellent, we’d prefer if Lynn viewed him as more of that complete, do-it-all back rather than pigeon holing him into an Ekeler role. Williams is a solid back, but it’s hard not to see every carry that goes his way instead of Swift’s as a likely win for the defense. And, given that this figures to be one of the worst offenses in the league, Swift ending up in a true timeshare might make it awfully tough for him to live up to his draft price — his ADP since the draft at NFC is 19.2 overall, or RB12.

That could be a fine price for Swift, but it might also be asking an awful lot of him to be as efficient as Ekeler as a pass catcher; Swift averaged 6.3 yards per target as a rookie, while Ekeler is at 8.0 for his career. And if Williams is really going to have a role alongside Swift, rather than behind him, it makes the math a bit harder to work for Swift.

I’m not moving Swift down my rankings at this point, but I already had him down at RB17 before this interview. But I do want to keep a closer eye on Lynn’s statements in the coming months as well as reports out of offseason workouts to see whether there’s something here.

Swift could be an absolute superstar, someone we’re talking about as a top-five pick for the next decade. But Williams may play a big enough role to sidetrack him. Let’s hope there’s room for both.