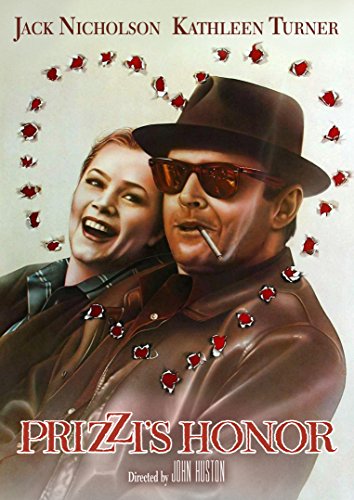 Hired killers by day… devoted lovers by night! Charley Partanna (Jack Nicholson, The Missouri Breaks), a do-it-yourself kind of guy, has been loyal to (The Family) since he can remember. If you need somebody rubbed out he’s your eraser, ready to kill at the drop of a dime. The mafia boss s daughter (Anjelica Huston, The Grifters) has eyes for Charley, but Charley has just married the sultry hired assassin named Irene Walker (Kathleen Turner, V.I. Warshawski). Their unlikely relationship hits a snag, however, as they find out that their next job is to ice each other. Now Charley must choose which contract to honor, the one to his wife or the one on his wife. Legendary filmmaker John Huston (The Unforgiven) directed this wickedly amoral killer comedy with a top-notch cast that includes Robert Loggia (The Marrying Man), William Hickey (Sea of Love), John Randolph (Serpico), and Lawrence Tierney (Reservoir Dogs). Winner of the 1986 Oscar for Supporting Actress (Huston).